The Toy Inventory went pretty well. Its a great way to clean while masquerading as playing with the kids. They love it because they discover long forgotten toys, I love it as it satisfies my OCD of things being in the right place! So the toys are organised and toy boxes cleaned! Just in case anyone was about to feel a pang of slovenly guilt, I did find a Christmas tree pine needle, circa 2010.
But the big tidy-up did start me thinking about some of the toys we've lost over the last few years. I don't mean your average broken or misplaced toy. I mean actually lost, turn-over the house in pursuit of finding said item.
The one that springs to mind is the library copy of 'Horton Hears a Who'. I cannot to this day tell you where it went. I do know that I looked everywhere for it. Everywhere. Even the freezer...there is a chance! I even called a SALT (Speech and Language Therapist) who had visited the house during the losing phase and basically accused her of taking it. "Hi, yeah, Baby Girl's fine but...you know when you visited, I don't suppose you...no?"
You know she was mouthing 'Cra zee' at the other end of the phone. So didn't find it, noticed they were selling it for £3.99 in the supermarket and tried to replace but library copies aren't the same, so it cost another £20 to replace. I'm not bitter I absolutely adore our library and visit more often than is probably normal. And Horton goes down as one of our cherished films so its win win.
The other lost item of note was The Boy's fork. It was from a specific set, a posh one, metal, none of this plastic business, with a fish on the handle. They each have their own set so you can imagine the havoc its loss caused. Literally had the house in bits - couldn't find it anywhere. The Daddy said he'd seen it under the dining room table, alas no.
Weeks later, as I am ferreting around under said table, retrieving some peas and a piece of dried pasta, my awareness came to a peculiar sensation in my hair. The Boy, clearly feeling Henry in the Horrid department had only gone and jammed the thing between the wood on the underside of the table. On the one hand, "Oh for God's sake" but on the other, a little bit "Genius". Found it hard to be mad.
This morning I accidentally dropped Baby Girl's toothbrush down the toilet so who am I to point the finger?
Posted by Emi Lou at 19:50

Never put off till tomorrow...


The day started today with an argument with The Boy at 7.09am “No your trumps are louder!”
I say the day started but that’s not strictly true! I had already been up for an hour and had cleaned the wetroom, checked my emails, managed to dress myself and brush my hair...
I read an article this month entitled: ‘Simple Ways to be Happy’ and it extolled the virtues of the ‘One Minute Rule’. It read: “Never postpone any task that can be completed in less than a minute.” I think its author needs to come round to my house.
I’d like to set the scene. There is a ten inch police car on the floor in front of the kitchen sink, primed to break both my legs, a life-sized baby doll in the through-fare in the dining room, again potential broken neck. There is a small boy’s slipper, in a hat on my dressing table, a popped balloon in pieces in the lounge. A pair of knickers, a sock and a cardi on the stairs. A tea towel in the middle of back yard and a plastic bowl under the bathroom sink, and we don’t have a leak.
We haven’t had company for a while!
My point is, I already soak up every spare minute of the day doing one minute jobs. Responding to emails, organising packed lunches, putting another load in. If I engaged with every act that took less than one minute, we would literally never leave the house. Most the time I just leave things where they are until one of the Mess Makers picks it up and moves it somewhere else (the police car is now in front of the cooker). What would be the point doing anything else? In the times I do attempt Operation Clear Up (when we have people coming and if they’re fellow parents sometimes not even then) I’ll often behave much like a pin ball, bouncing from moving one thing to another place, while finding another in the process and veering off in another trajectory, ricocheting in a desultory fashion.
I was having a chat with one of the Inner Circle the other day and we agreed that mothers of our generation are experts at having it all, doing everything... badly. How I yearn for a sense of completeness, for a sense of a job done well, not just a creating a Joseph costume at 11pm, thrown together by cutting holes in a laundry basket liner... anyhoo, such is the inspiration of tomorrow’s ‘We will be mostly...’
And of course, I’ve been hoodwinked by vapid articles not delivering in the magazine world since the days of Mizz, so I don’t know why I’m surprised!

So, the pancakes were a hit. Why only one day a year? Might write a reminder in my diary for later in the year.
August 10th: Pancakes exist!
Today was the first day that Baby Girl has managed to keep a ponytail in for the duration. Think she quite likes it, caught her flirting at the checkout at the supermarket. Am slightly worried if left in the hands of The Daddy, found her at lunchtime yesterday with her knickers on through the leg hole. Nearly cut off the circulation bless her so holy moley, don't like his chances with an up do!
It was with some remorse this morning, that I agreed to help out at Pre School on Friday. A teacher enthused "Oooh great, its pyjama day, see you there" and so the glamour goes on... better hunt out my fleecy penguins!
Today has been a day for 'Surprising Sentences'.
1) "Why are you licking the baby doll in the eye? Do I lick you in the eye?"
2) "Are you sure he's in a safe place?" - The Boy replied somewhat irked "Yes he's in the tumble dryer" Duh!
3)"You can't fix balloons sweetheart :0( "
It would be awesome for people to share their 'Surprising Sentences' on here. Or anything, this blog is looking a bit lonely, sniff, sniff.

Not that Primrose Hill

Well the trotting up Primrose Hill went fairly well. I did get a few odd looks from some ramblers when The Boy insisted "Come on Mummy, you're not cantering" while he was locked in the loop of my scarf, both ends acting as reins.
Then again they could have been wondering if that really was poo down the front of my trousers. It was... that's another story. But all that aside the lambies are out people, spring is coming, I can feel it!
Posted by Emi Lou at 19:17

Duckapulting!!!
**There were no ducks harmed in the making of this post. Well not badly anyway!** 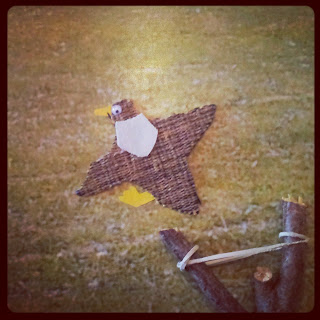 Always on the lookout for ways to 'pimp' an activity for the kids, it was with some derring do that I set out on Wednesday with the kids and an over sized elastic band to the local duck pond. What could be more exciting than launching morsels of duck fodder at high speed?
Was a little worried, as the pond does have strict signs requesting only brown bread be used to feed the ducks, duck feeding is clearly a serious business round these parts (no doubt IBS is not just a human phenomenon). There were rather more people around than I would have liked but no matter, some trees provided enough coverage.
And so it began. Attempt one resulted in only minimal injury to my face. I couldn't fathom it. I mean I know I'm a girl but surely I was pulling the catapult in the right direction? Tried it again, same thing happened (crumbface!) Did attempt pulling the catapult in the other direction just in case I'd somehow in my 33 years not managed to grasp the physics of the thing. That one hurt a bit more.
As time went on, I started to get a bit more into my groove and a few bits did go in the right direction but I have to say, (and it was bread so keep your knickers on any animal rights activists out there), I did hit a couple of ducks in the head. They then went on to eat said bread so it was more of a wake up call for them really.
In conclusion, not a major success but the kids did find some amusement in it.
Post Script: I told my better half about it and of course in a fit of competitiveness we found ourselves "ooops!" down at the canal yesterday. He was better than me in a big way. No injuries and perfect doughy trajectories. Oh well, perhaps more practise needed.