Friday is my day 'off', the kids are both in pre-school so I get to... do some work! As I climbed into bed with The Daddy last night he asked me how I'd be spending this rare occasion. I said I would like to do some chillin' but knowing me it would probably end up with cleaning or working through my To Do List. I also had a kid's story about Red Bottle Rocket knocking around in my head, all white dwarfs, asteroid belts and space junk. However, what transpired was none of those things.
After months in the making, I had hoped that Red Bottle would go back onto the shelf for another couple of weeks, while I mustered the energy to tackle the project again. Not so. As we were readying ourselves to leave for pre-school this morning, The Boy fixed me with a threatening glare and said "Mummy. I love my Red Bottle Rocket... but it needs fire."
So I didn't make life easier by going shopping alone, or clean the house or tackle my To Do List or space story. I found some material in red, orange and yellow and started cutting. I had also been told over breakfast that the project needed some "details" (you see he comes out with something like that and it blows me away, yet he can't seem to respond to his own name). So cardboard, scissors and a can of silver spray paint later, we had moon, stars oh and I'd downloaded a 'blast off' graphic from the Internet. There would have been more but the glue bottle is AWOL (dear God what have they done with it!)
The whole caboodle was varnished, fire sewn into the thrusters and finally it is finished.
The Boy came and found me, after initially gleefully running off with it and said "Thank you Mummy for making my rocket so special". He'd been told to say it by The Daddy, but still.
The blood (pricked finger on needle, paper cut and pranged hand trying to open varnish) and sweat (all consuming concentration) parts are done, now I'm just waiting for the tears. I try to operate a 'No Crying' policy in front of the kids so the day this baby dies, I might have to take myself off for a 'moment'. 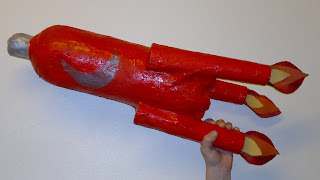 Apologies no 'Psychology of Play' tonght, been otherwise engaged, until tomorrow then...
Posted by Emi Lou at 19:40