That's what we tell ourselves, at least it is in this house, and it has worked with moderate success over the last four and more years. You hear phrases like 'the kids need routine' and 'they thrive on it!' I wholeheartedly agree.

Where things might have gone a bit wrong is when components have inadvertently slipped into the routine that you didn't mean to be there.

A case in point, I've just put my kidlies to bed. We have had a bath and bedtime routine for as long as they are old. It has gradually expanded and digressed into a ritual of some significance: the addition of more stories; the necessity for them to put their own clothes in the washing baskets; to turn on their own alarm, but they share a room so we have to remember who did it last night and hence who gets to have the first choice of story in return; Baby Girl's insistence that she choose her own 'wappy' (I implore her every night: 'They're all the same!'); a song; the choice of song. You get the gist.

The most recent addition - and it was too cute to not to continue - is The Boy's urging me to "catch" the kisses he blows me. But you see, this didn't stop at one; a once sweet end to the day is now a battleground.
'I'm only going to catch one,' doesn't have the same ring as, 'I've glued it to my heart'. Don't think it helped that I pretended they were bouncing off the walls. See... it seemed like a good idea at the time. 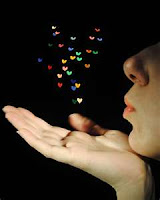 Ditto to the idea of replacing our usual bedtime song with Rudolph the Red Nosed Reindeer over Christmas, I should have acknowledged they are creatures of habit, slaves to routine; you just try re-introducing Mr Sandman on 1st January! Rage. Pure Rage.


What goes on in your home, any crazy routines you've fallen into? Food colouring in the bath? Little people 'helping' while washing up? Lengthy farewells at nursery? 'I love you more,' 'NO I love you more!'... please share the crazy!
Posted by Emi Lou at 20:00