Running just as fast as I can... be bothered

There are two ways that you can read that statement. My first instinct is to infer that running is for heroes and weirdos - you have to be a bit bonkers to put yourself through it.
But then there's the other way to read it. Running, although a physical employ, is all in the mind. This translation I am coming around to more.
I used to run, when I was a kid. Well if I'm anything like my two tearaways, I'll have done nothing but run from the age of two until at least four.
But as an awkward teen, I used to run for the county and would train around the village, always with a cap on, hoping no one would see me, sweaty, red-faced, self-conscious that my shorts were hitched up between thighs, which at the time must have barely met.
As an adult I ran as an asinine attempt to lose the pounds that crept on. It never worked, I'd only compensate with cake.
Two children down the line, I'm in pretty good shape, yet I haven't run for years. The secret? Walking. Just walking. When the kids were born I would walk, while they napped I would pound the pavements pushing their buggy, every day. Never for longer than an hour, but consistently and the weight disappeared. After Baby Girl the workout became harder as The Boy enjoyed a ride on the Buggy Board.
Now, neither one will sit in the buggy, let alone nap. Nor can they move in a linear fashion with any velocity, and in line with my cake addiction, the pounds are creeping on.
So I decided, I'd start walking again and dear reader it has been nothing less than a revelation. Post-bedtime I am now frequently found displaying the fast waddle of an urgent goose.
It has opened up a whole new world to me. A world where other people are out exercising, and they smile and wave, they're happy - its all the endorphins you see. A world where boxes on driveways offer free vegetables because a plentiful crop has been harvested. A world of peace, I pass climbing frames and trampolines, all blissfully silent, curtains upstairs closed - there's a kind of hush. A world where I can listen to my music, think about nothing, say nothing, achieve nothing. It's just a walk after all.

As with everything, it's not perfect. With these balmy evenings, the long shadows make my bum look huge and my head tiny, hands like spades, although even this is quite funny - a shadow version of The Hall of Mirrors. I have to dodge crazy numbers of slug roadkill (sometimes I scoop them up, pop 'em in my fanny pack to fry up later on toast). There are nettles overhanging at every turn, ready to disfigure my already compromised features. I don't have as good a grip on my pelvic floor, as I would like and my thighs definitely meet in the middle.
But here's the funny thing, each time I've done it, at some point I've broken into a run. Anything can set it off, a jog across the road to avoid a car, "I bet that you look good on the dance floor" on the iPod... even an attempt to cover up a stumble... And I can stop! Just like Forrest Gump, I can stop at any moment, there's no stop watch, no race meet to train for. In the past it has always felt like a chore but just knowing that I don't have to run somehow makes it easier, mentally there's no pressure.  It feels good and makes me smile. I come home light-footed, shoulders relaxed, ponytail bobbing cheerfully, eager to down a pint of cleansing water. 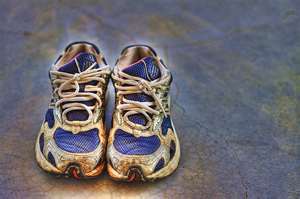 On my first return home I gaily recounted to The Daddy the exhilarating fact that I had been beeped at by boys driving small cars... twice. (This MILF effect, pleased me if only to counteract the "Hall of Shadows" effect).
The Daddy asked: "We're you "fast walking" or "slow running"?"
"Bit of both" I supposed.
He did what a nod would look like in reverse.
"Were you carrying that?" he continued.
"Yeah" I replied looking at my hand, (adorned with a hot pink sweat band) and observing its contents objectively for the first time - a (now sweaty) courgette.
His look conveyed that he thought the boys might have been taking the Michael. That perhaps I looked like a pillock. And do you know what dear reader, much has changed, because I didn't care. I might be two kids to the wind and pushing mid-thirties but am thrilled by my self-unconsciousness.