How do you do...Symmetry Scissoring?

Baby Girl turned three last week. I'm not certain if that makes her just: "The Girl", surely not!

A few days later we opened a delayed pressy, (she's loving the week of birthdays btw). She discarded the gift as has become commonplace - she had previous for eschewing a wooden kitchen (3 hours in the making) in favour of a balloon and some wooden play-food in favour of the bubblewrap. Nothing new there.

Anyway, this time it was the wrapping paper which I was diligently making moves to discard of.

With a smidgen of encouragement from The Boy, they embarked on a confetti cutting contest. Now I'm not saying it wasn't carnage to clear away but the payoff was, it kept them busy. Further, once I'd chilled my boots about the mess and had chance to engage the creative side of my brain, I got stuck in with the sugar paper and started showing them how to fold it in half to make symmetry pictures. Your subject is somewhat limited to: butterflies; trees; flowers; people and faces - that's all I could think of. 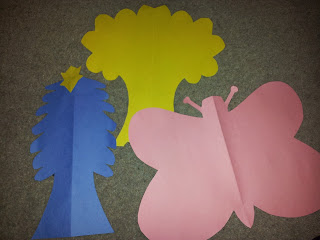 Its all in the eyes, I discovered you can change expressions quite a lot just by moving them! 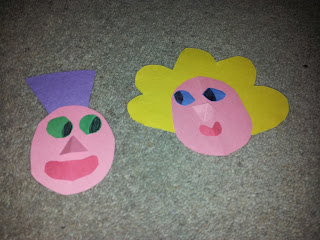 .
Someone special recently told me "Life isn't about waiting for the storm to pass, it's about learning to dance in the rain". Now the kids are reinforcing it - what I think it means is - stop tidying up and have some fun.

Howe do you do... duck racing?

Today is World Rubber Ducky Day and what better excuse to get down to our local stream for a duck race. We wrapped up warm as the weather was bright but frosty, got our wellies on and made haste to the forest (Delamere - Manley Side near the Cycle Skills Area, for locals). 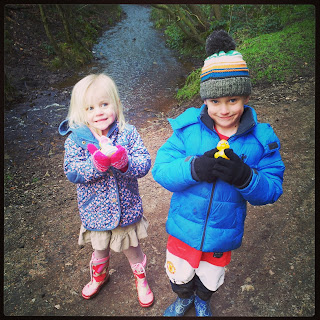 There was ice-puddle-smashing and fighting talk on the way;
Rainbow Duck was the favourite to win. 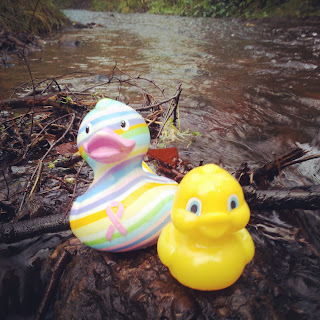 But besides a heart-stopping moment when we lost yellow duck down a pipe,
he was the stand-alone winner.
We would have made a mini gold medal and podium but we were all freezing. 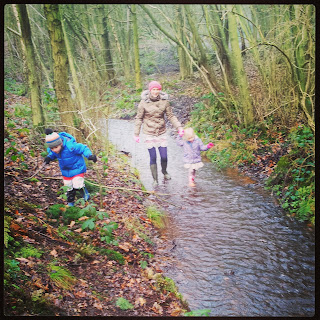 Good fun, any day of the year...but it has left me wondering,
why do my most inspired ideas always involve ducks?
Duckapulting