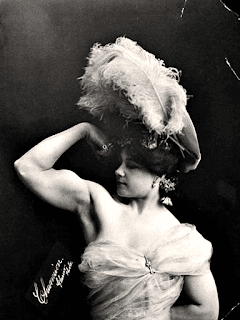 Kate Brumbach was born in Vienna Austria in 1884. She was born into a family already known for their strength performance. Among her siblings, they were known for their great physical strength and often performed together. However it became clear that Kate had natural strength abilities and through intensive practice, she rose to “spectacular fame”.

Her act became one where she wrestled men and challenged any man 100 marks to beat her, but none ever did. It was in this strange way she met her husband!

In the early 1900’s the couple came to New York, it was here that Kate was given her new name. In New York she changed her act to weightlifting. This time she challenged any man in the audience to lift more than her. One man stepped forward. Eugene Sandow, also known as the most famous bodybuilder of the time.

As the contest got under way the pair matched each other at every step. Until finally Kate lifted 300 lbs above her head! Eugene faltered at his chest and dropped the weight back to the ground. From then on Kate Brumbach was known as Katie Sandwina – the female version of Sandow.

Throughout her career she was known for breaking chains with her hands, twisting iron rods, holding her husband above her head and juggling cannonballs! 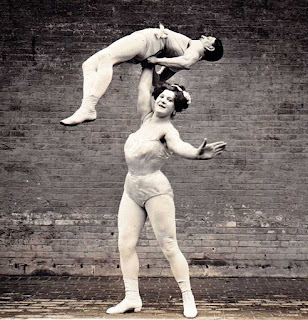 Where was Katie born?

What was Katie’s real name?

What unusual way did Katie meet her husband?

What are marks? How many did Katie ask for to wrestle a man?

What do you think people thought of a woman who could lift weights?

Katie had natural strength but what helped her achieve “spectacular fame”?

When did Katie got to New York?

Who was the current most famous bodybuilder?

How much did Katie lift to beat him?

Why did Katie’s name change?

How do you think Katie felt about changing her name?

Katie’s act also included what else?